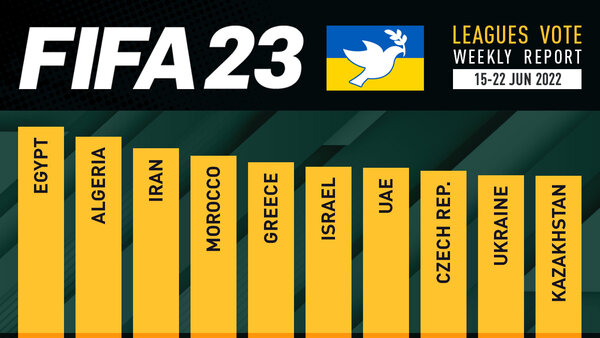 After FIFA 22 video game, FIFA and EA Sports will give us another exciting FIFA 23 game. And this time, football fans and loving game players of the yet-to-be-released FIFA game have made over 300,000 votes from around the world — despite many rumors surrounding FIFA 23 release date. Gamerina discovered that at least fans from 108 different nations submitted their FIFA 23 league votes on FIFplay to decide which football league should be in FIFA 23 season game.

It is the goal of this poll to encourage EA Sports to license FIFA franchise leagues for this year’s game. A report will be sent to EA with a copy of these FIFA 23 league vote results.

It is even more likely that new leagues and new teams will be added since EA Sports are still developing the game and FIFA 23 release date has not been officially announced. This may lead to the creation of new leagues and new teams, adding to the over 700 teams in next year’s game, FIFA 23. Football fans are also anticipating the coming year’s game and the season will include the world women’s game popularly known as the women’s world cup, the women’s football national league.

Whether it is new leagues or your favourite league that is added, it will definitely include new teams excluding Russian clubs such as Spartak Moscow and Lokomotiv Moscow. The addition of new teams will also see new player licenses added to Volta Football, as well as career mode in the FIFA game. And yes, the new league additions will undoubtedly be available on FIFA standard edition and FIFA ultimate team edition. Even with all these, EA Sports FC is expected to have even more new leagues when it finally launches on a yet-to-be-announced official release date in 2023 as EA SPORTS promised the “independent platform will bring fresh opportunity…”

You can vote for the league you would like to see included in FIFA 23 year game by visiting FIFplay’s FIFA 23 league vote page. You can then make your FIFA 23 league vote for your favourite league via the voting form. You can vote for the league you want to see added to the FIFA 23 Leagues list to increase its odds of being added. The result can help EA Sports rightly decide what football leagues will be included in its upcoming season game.

What New leagues Will Be in FIFA 23?

Several new leagues will be debuting in FIFA 23 for the first time, as EA is clearly looking for changes in the game series. As of now, Dexterto has confirmed that EA Sports will feature new five leagues in FIFA 23 game. They are FA Women’s Super League (England), National Women’s Soccer League (USA), Frauen-Bundesliga (Germany), Division 1 Féminine (France), and Vanarama National League (England).

Will There be More National Teams in FIFA 23?

eFootball 2022 Legends: The Best of the Best