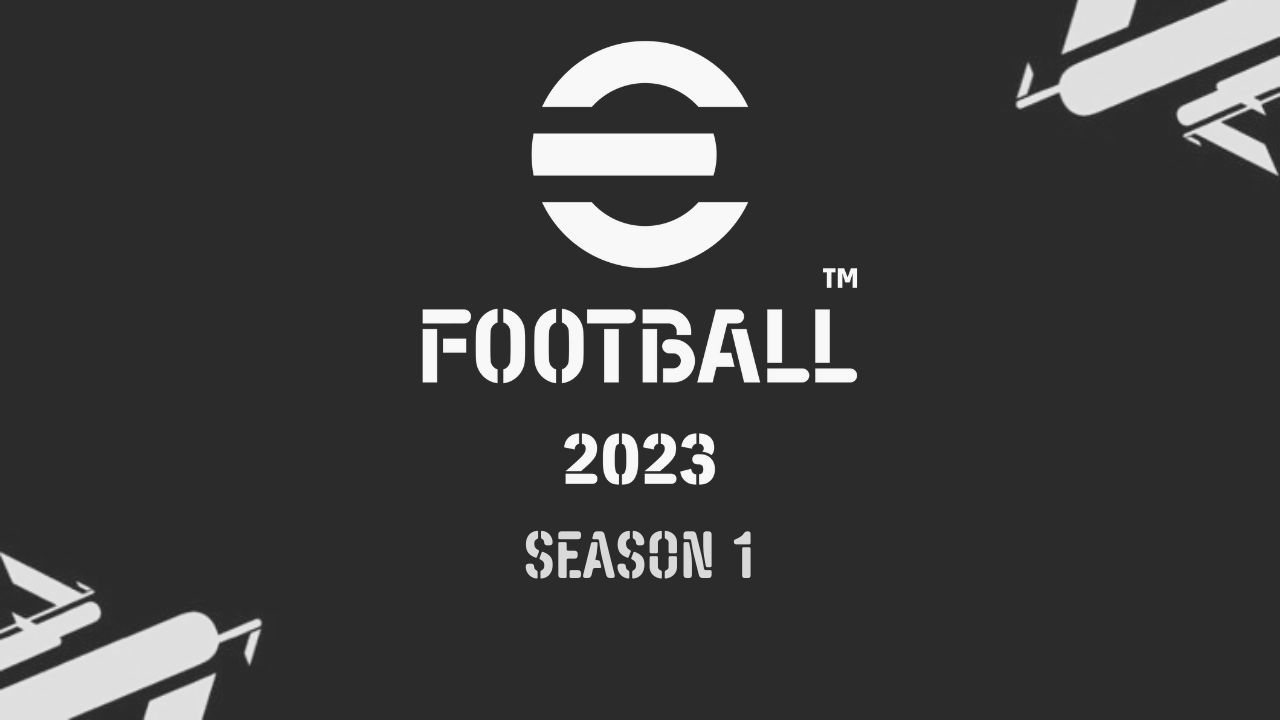 eFootball 2023 has finally hit the shelves, and what a game it is! If you’re not familiar with eFootball, it’s a football simulation game based on Konami’s Pro Evolution Soccer (PES) series. But unlike any other PES games out there, eFootball 2023 Season 1 has a lot of qualities that are absolutely unique to this year’s edition.

eFootball™ 2023 Season 1 theme is “New Season Kickoff -New Player Types & Licenses-“. The new season brings with it new players and managers, as well as new expectations and goals for teams and fans. You can select among 26 teams in eFootball 2023 with their latest recent strips and new player appearances!

Meanwhile, if you will love to know every new gameplay feature added to eFootball PES 2023, you can check the article titled “eFootball 2023 Features.”

We are aware that there were instances of excessive inertia application in defensive situations, especially when switching directions or coming to a full stop during a Dash movement. As such, we have implemented adjustments to the application of inertia. Players will now be able to react more responsively to the opposition’s sudden directional changes, as well as making it easier to turn and chase opponents down.

For attacking, we have implemented enhancements on the manoeuvrability of ball control through reviewing dribbling-related animations as well as the speed of ball touches. These adjustments will surely turn up the heat for 1 vs 1 on-the-ball battles.

On the other hand, we have also reviewed the expression of player individualities. Until now, players’ Acceleration stat was the sole deciding factor in determining their speed of movement and acceleration in defensive situations. This in turn created a problem where defenders with high defensive abilities were not adequately represented. Conversely, attackers who are not apt at defending would be able to easily regain possession in the front line.

In order to address this issue, we have implemented adjustments to the reflection criteria for player acceleration; Defensive Awareness and GK Awareness will also be taken into account now when determining players’ speed of movement and acceleration in defensive situations.

On a similar note, the reflection criteria for ball control have also been reviewed. Like the previous case, players’ swiftness of ball touches was solely influenced by their Acceleration stat in the past. This has been changed and their Ball Control stat will now be taken into account as well.

Moreover, we have diminished the effect players’ height have on their ball control responsiveness.
This allows taller players with a high Ball Control stat to control the ball and move on with their next play in a more rapid manner.

Feints have also been reviewed in a similar manner, and the impact of players’ Dribbling stat has been amplified whilst the effect of their height has been lessened.

Corner kicks often present important scoring opportunities in real-world football. However, we are aware that the scoring patterns from corner kicks were slightly unrealistic in previous versions of the game. As such, we have adjusted the trajectory and accuracy of kicks. We have also adjusted the positioning and reactions of defenders and the goalkeeper.

Another issue was that there were too many goals scored immediately after kick-off, which isn’t a common sight in real-world football. This has also been addressed by adjusting the positioning of defensive marking and the defence line at kick-off. The adjustments serve to mitigate instances where unnatural man-marking allows opposition players to break free.

The “Long Ball” Team Playstyle is an embodiment of the renowned “Route 1 football” tactic. For this Team Playstyle, long balls are hoofed towards a solitary target at the front line in hopes of contesting and retaining possession high up the pitch for quick attacking opportunities.

The application may crash due to an error

When attempting a direct shot on the receiving end of crosses, the player may take a touch with his chest before shooting

In online matches, kick feints may not be triggered even if a kick feint command is inputted

Trajectory adjustments of goal kicks are not reflected

For goalkeepers, the “pick up the ball” command may not be performed as intended

After inputting certain goalkeeping commands in specific sequences, the goalkeeper may become slow in movement

When restarting with a quick throw-in, the match may restart without the ball being displayed

When the ball goes out for a corner kick, the match may restart immediately after the ball went out of play

The shoulders of some spectators may move in an unnatural manner

When there is a connection delay in online matches, players may move on their own after controlling the ball even if no commands were inputted

In certain stadiums, parts of the stands may illuminate excessively and flicker during certain cutscenes

In certain stadiums, the lighting around the roof may flicker during certain cutscenes

During the victory cutscenes of certain competitions, some parts of the stadium may not be displayed

In certain stadiums, pillar-like graphics are displayed in the foreground during replays

The post-match Exp. Gain screen is displayed even if there are no Experience Points gained

If only ineligible Events are being held in Challenge Events (Authentic), an error will occur when proceeding from the Events screen

After exchanging eFootball™ Points for in-game items, the cursor returns to the top of the list

In the player details screen, the name of the column that displays information regarding Team Playstyle Proficiency is erroneously titled “Team Playstyle”

After developing a player to max Level, the small thumbnail image remains the same even though the Player Card photo has changed

In [Standard Player List], switching the Sort filters repeatedly between “Player Value” and “Price” will result in erroneous display of the Player List

In some languages, the end of sentences may be displayed erroneously in certain screens

In [Game Settings] > [Audio] > [Audio] > [Custom], environmental sounds may still be played in-match even if the [Stadium] option is set to 0

In some languages, the word order of the displayed text is erroneous

The application may crash due to an error

When defending the opposition’s passes and free-kicks, “Match-up” may not be triggered continuously and could instead be interrupted

When defending a set-piece with the Defending Control Type set to “Standard” for “Classic” Control Type, players will not dash even after pressing “Dash & Pressure”

After passing to a nearby teammate in a short corner, ball control commands may not trigger as intended・ When there is a connection delay in online matches, players may move on their own after controlling the ball even if no commands were inputted

When taking a corner kick, pressing the “Switch View” button repeatedly will result in the camera view being switched repeatedly

When scoring with a powerful shot, the ball may pierce through the goal net

hen taking a free-kick for the first time with the camera zoomed out, pressing the “Switch Camera Angle” button repeatedly will see the command guides being displayed

The device’s “Back” key may not work during offline matches

In online matches, the match may resume with the Game Plan Auto Settings screen still being displayed as the time limit runs out

During online matches, a different Camera Settings than the one configured may be reflected instead

In [Camera Settings], tapping the “Back” button repeatedly may result in frequent switches between the Camera Settings screen and the blue background

During goal celebrations, if one finger is held down on the screen, the celebration cutscene cannot be skipped by tapping the screen with the other finger

The post-match Exp. Gain screen is displayed even if there are no Experience Points gainedn Friend Match, the edited team name is not displayed under Match History

In Friend Match, player injuries will still occur even after setting “Injuries” to “Off”

In Friend Match, accessing User Details will see the user’s own details being displayed instead of the opponent’s

In Game Plan, the Reserves menu remains active even if there are no Reserves player registered

In Game Plan, viewing the Player Details of a Reserves player will see the scroll position of the Reserves list being rese

When the Card View display is selected under [My Team] > [Players], scrolling to the top or the bottom of the list will disable the “Rotate” option temporarily

When performing contract renewals under [My Team] > [Players], selecting a player after sorting in the order of [Duration of Contract] will see the Player Card of a different player being erroneously displayed

In the player details screen, the name of the column that displays information regarding Team Playstyle Proficiency is erroneously titled “Team Playstyle”

When putting a Lock on a manager whilst possessing more than 4 managers in the team, the Lock icon will appear momentarily on the other managers displayed in the back

In [Standard Player List] or [Manager List], mismatches between the displayed region names and images will occur when filtering players/managers with the “Nationalty/Region” option

When tapping an inactive menu, the menu sound effects may erroneously play

In instances where tapping the screen does not trigger screen transitions, menu sound effects may still erroneously play

In [Game Settings] > [Audio], environmental sounds may still be played in-match even if the [Stadium] option is set to 0

After setting Control Type to “Classic” in certain languages, the “Pressure button” is not mentioned in the “GK Dash” command guide under [Extras] > [Help] > [Command List] > [Defence]

When Control Type is set to “Standard”, the buttons displayed in the “Pressure” command tutorial video are incorrect

When a player receives a yellow card in the Tutorial match, the yellow card icon is not displayed next to the player’s name

In the command tutorial for “Match-up”, the displayed command feedback is different than the command performed

During Free Training, the entire screen may go black except for the UI displays

In the “Dribbling” and “Pressing” command tutorials, the “Opponent scored” message is erroneously displayed after the ball goes into either of the goals

When releasing a player that is already registered in Game Plan, an alert message will be displayed indicating that “The player is currently registered in a Game Plan”, and said player can now be released directly afterwards

A variety of minor adjustments have been made to each mode and to matches, with the aim of improving the overall gaming experience

[On iOS, and Android]

Players registered in Game Plan can be released directly, with an alert message indicating “You have selected a player in your Game Plan”

A variety of minor adjustments have been made to each mode and to matches, with the aim of improving the overall gaming experience

In eFootball 2023, a new pack called club packs are now available. There are 11 player cards in a club pack. Each player’s card has a unique design.

You can use club packs such as AC Milan club pack, Internazionale Milano club pack, or Club América club Packs. Meanwhile, to strengthen and make your Dream Team more competitive, you can also use any among the 11 player cards as its fit in your squad.

The Manager Pack in eFootball 2023 contains a set of Training Programs and a managerial mastermind. During matches, you will earn 400% more Experience Points if you hire legend managers such as J. Cruijff and F. Cannavaro.

How Much Does eFootball 2023 Cost?

eFootball 2023 is available for free on mobile devices such as iOS, and Android.

When Will eFootball 2023 be on Mobile?

Does eFootball 2023 have Crossplay?

According to IGN, a full cross-platform play will arrive in the eFootball game during Winter, typically between December 2022 and March 2023.

Advance eFootball™ 2022 Mobile Controls: Learn to Play Like a Wizard